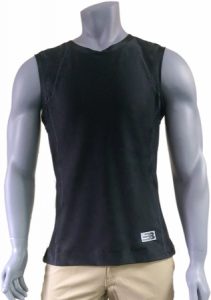 This new body armor is pretty much invisible under your normal clothing and you would never know if someone is wearing it.

Most people today are more eager to concentrate on protecting themselves by purchasing guns but not body armor and you really don’t realize that you may be a victim of a shooting or stabbing at any time, even if you are armed. Body armor is an essential piece of kit for your overall protection.

There is so much uncertainty in the world today and we all know how some people who are walking the streets seem to have got crazier in recent times. A bullet and stab proof vest is the ultimate source of body armor which is designed for adding that extra protection.

At last, we can all have access to the same protection that police officers have had for years and it’s as, if not more important than arming yourself. The only difference with this type of vest is that it’s not bulky and is practically invisible under your normal clothing.

Bullet Blocker is a company that has developed this new style of a vest which has been proven as very popular for undercover police and it’s now available to the public. The bullet stab proof vest is called ‘Gabriel’ and has also been used by secret service agents due to its unbulky style.

Does It Work? The Bullet Blocker https://t.co/RTu5mwRxgk via @YouTube

One policeman recently stated that he had worn it under his normal T Shirt and it was virtually invisible. All Bullet Blocker clothing accessories can be washed normally after removing the Kevlar panels. These vests are also very comfortable, unlike the original bulky vests.

Many parents are also protecting their kids from gun wielding maniacs with making sure they have these vests to protect them. The good news is that Bullet Blocker makes other body armor items too including backpacks, bags, coats, and jackets.

School shootings have escalated in recent years and due to the fear of another one breaking out anytime soon, parents have been more vigilant and protective over these constant threats. All of the clothing meets NIJ IIIA standards and can protect from most ammunition.

Guns are the protection tool of choice in the USA but as stated before, you need to be able to protect yourself from any potential attack from either a shooter or knife-wielding maniac and if you are wearing a bullet and stab proof vest then you have a much better chance of being saved from a blade or bullet.

The world is getting more insane every day and the prepping industry is thriving and you can see why. We must be certain that the world has changed and terrorism is not the only threat to our way of life so it’s important to take these things very seriously indeed.

The video below is not in English but it shows you the bullet stab proof vest under normal clothing.

Stay safe folks (no satire theme on this one).