Do robots eat people? Well, not usually but the corpse-eating robot called EATR does exactly that.

Many children have asked the question: Do robots eat people? EATR – Energetically Autonomous Tactical Robot is the name of this machine and has the capability of eating people and has been designed for a military purpose.

They are powered by biomass which is anything consisting of plants, fallen trees, and even corpses. DARPA has designed this robot for the battlefield and although it has a chainsaw to chop up trees there is also the implication that dead corpses could also be chopped up and could be a way of clearing up the battlefield.

EATR, the devouring robot doesn’t look that menacing. It has 4 wheels and a long arm which looks more like something that should be on a building site. The scary part about this is the possibility of a Terminator-style scenario happening. 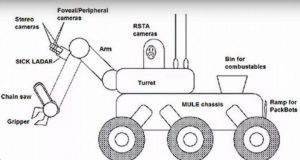 Harry Schoell who is the CEO of the company – Cyclone Power Technologies who has been manufacturing these robots has reassured the human race that there will not be any robots eating humans alive (only dead). The project is funded by DARPA the Defence Advanced Research Project Agency which is the worrying part.

What would happen if these robots started to turn on the human race? We’ve already seen robots that have 4 legs and can run extremely fast. These dog-like robots designed by Boston Dynamics are very scary and can jump over obstacles like an animal.

So do robots eat people?

They can and EATR is capable of doing so but it’s only designed to eat biomass which consists of leaves, twigs, plant matter and fallen trees so you have nothing to worry about. According to the Geneva Convention eating humans is forbidden so they are not allowed to be acting out our worst nightmare.

The Geneva Convention will not stop the robots suddenly finding their own way of communicating with each other just like the Terminator films. There could also be a rogue hacker who knows a little too much about hacking into these systems which could end up with these robots doing the exact opposite of what they are supposed to be doing.

Let’s hope these corpse-eating robots do as they are told by mentally sane individuals and the psycho’s don’t get their hands on them! 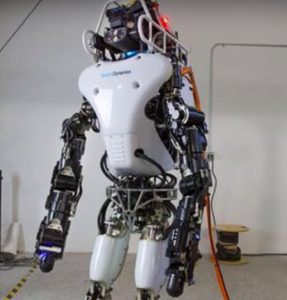