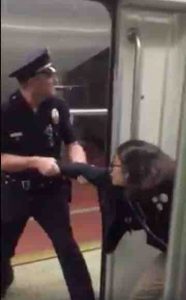 You can see in the video she is being manhandled and dragged off the train.

Maybe the police need to arrest people for more serious crimes and not something as trivial as this?

Video of the scene has gone viral on social media and many people are shocked and angry at the reason this lady is being arrested. The incident happened in Los Angeles recently and had been witnessed by various commuters.

An LAPD officer had confronted the lady for taking up two seats with her feet up on the seats. She is resisting to his authority which then results in the cop dragging her off the train.

You can see how arrogant this policeman is and his power has gone straight to his head. Arresting someone over putting their feet on the seat is the most pathetic thing we have ever seen and he should be suspended for doing so unless it’s now law?

It is a legal matter if you are taking up two seats while doing this act. The lady arrested in this video is doing that which is the reason she is being arrested. It looks like it is the cops arrogant and power hungry attitude towards her that makes this video look like he is in the wrong.

The cop is, in fact, doing the right thing in a situation where a person is taking up two seats. In many countries including the UK, a person doing this can receive a fine for putting their feet up on a seat on public transport.

An investigation on this cop for use of force is being launched. As you can see in the video, he is very forceful towards the lady. The cop calls for backup and when the other police arrive there are two arrests.

The lady involved in the incident and another lady who is swearing and shouting at the cop are being arrested. 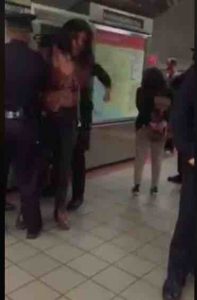 A statement released by the Los Angeles Transportation Authority is disappointed in how the police handled this incident and they are very concerned.

Watch the video and let us know what you think in the comments below.