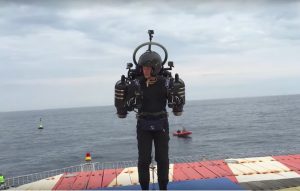 As you think of purchasing your very first hybrid vehicle, as a futurist, the one question you are probably asking yourself is, “where are all the jetpacks already?”

The future is certainly here with us as a video has surfaced online showing a guy taking off the ground strapped to a jetpack.

For many years, the jetpack has been one of the future’s iconic symbol that has always been around the corner. Now, the prospect of flying jetpacks is gradually shaping up to be a reality and a real, commercial thing, although probably not for everyone. This is because the thing is damn expensive.

Several companies at least have made strides in this sector. For instance, JetPack Aviation prides itself as the only company to ever build the “world’s only true jetpacks.” This jetpack branded “JB-9” has been defined as “a jet turbine-powered backpack which can take off vertically and land.

JetPack Aviation is also in the process of building its next model, JB-10, which is expected to travel at an average speed of 100mph and can stay in the air for up to ten minutes. Other types of jetpacks that have been designed so far are the water jetpacks. 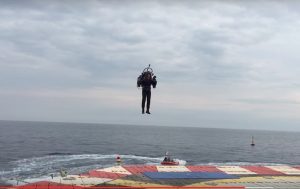 From the look of things, the future of jetpacks is not that pretty. A lot of nasty things can happen in the air ranging from aerial collisions to bifurcated billboards to scorched legs. The prospects of flying jetpacks appear to be an awesome idea based on what we have seen in movies and cartoons, but the future reality is horrendous.

Probably you have heard of the great comedian, George Carlin, who once said, “do you realise that while driving, people driving slower than you are idiots and those driving faster than you are psychopaths?” This is false. Most people generally suck at driving given the kind of reckless driving witnessed in our roads.
In 2015 alone, slightly over 4.4 million traffic accidents were reported, according to the U.S. Census Bureau. If these statistics are anything to go by, then it would be reasonable to conclude that if people were flying jetpacks around, then we would all be dead in less than a decade. Important to note is that not even a single one of the victims of the accidents was flying. All of them were driving on regular roads, on the ground, where one only has to be concerned about movement in two dimensions.

This is not to say that everyone driving is an idiot, but remember that the 4.4 million accidents were caused by people doing something dumb. Do you really want such individuals flying jetpacks filled with extremely dangerous jet fuel with the hungry claws of gravity trying hard to haul them into the adjacent city park or animal orphanage? Probably not. Therefore, if adequate measures are not taken to address traffic issues that will significantly reduce traffic accidents, then the evolution of jetpacks as a future mode of transportation will be nothing short of a disaster waiting to happen.

Here is a great video of the JB10 Jetpack.