Have you ever wondered why you sometimes feel a certain way when you step into a room full of people?

Maybe a circumstance you find yourself in just doesn’t feel as it should. Intuition plays a big part in this, but there is something else that fuels the power of intuition. The Pineal Gland (Third Eye) is mainly responsible for these strange and unusual feelings.

For centuries they have illustrated the Pineal Gland in ancient drawings, texts, and books by civilizations before us. These ancient civilizations had a vast knowledge of the power we have as humans available within our brains.

We only use a small percentage of our brain’s capacity. The “sixth sense” abilities we all have stemmed from this mysterious part of the brain.

We will bring some highly interesting facts into this topic without too much biological jargon. The chemical DMT (Dimethyltryptamine) is a prominent compound found in nature. DMT plays a very significant role in the Pineal’s mystery. We delve deeper into this later on in the article.

First, we look into the brief history and purpose of this small gland. We find out what It is and what is its purpose (as far as we know today). 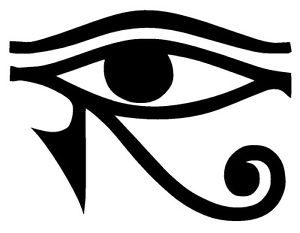 What Is The History And Purpose Of The Pineal Gland?

The Pineal Gland is a tiny gland shaped like a pine cone hence the name “Pineal”. The gland is situated at the back and central part of the brain.

For years they have steeped this small gland in mystery. The Pineal Gland goes back to ancient Egypt, and as far back as the Sumerian civilizations. 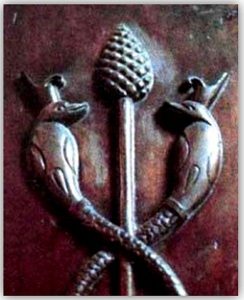 The Egyptian Staff of Osiris is a symbol which features two serpents and what looks like a pine cone. The Pinecone is a sacred symbol within many cultures and represents Human Enlightenment and longevity.

The Hindu faith shows the third eye by placing a red dot in the forehead’s middle which shows “divine sight”. Other cultures and faiths also symbolize the third eye as the “Ajna” (brow chakra). This refers to the gate of higher consciousness. 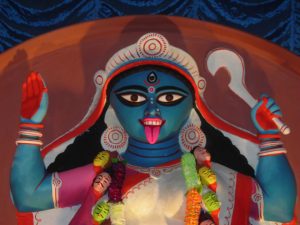 Without the function of the Pineal Gland, your sleep cycle would be in complete chaos. The gland manages our circadian rhythms which produce the chemical Melatonin and helps us go to sleep and wake up.

Light and darkness are triggers for the Pineal gland which help determine our sleep patterns. Have you ever woken up in the morning without an alarm clock?

The Pineal gland manages this and Melatonin aids the promotion of sleep at night.

Serotonin is a neurotransmitter and a forerunner to Melatonin responsible for behavior and moods and even appetite.

Melatonin and Serotonin are essential for keeping the body in harmony. Without them, we could not function well at all.

The formation of Melatonin and Serotonin by the Pineal gland is common knowledge within the circles of Biology. The pea-sized gland has another mysterious purpose.

The Production Of The Chemical Dimethyltryptamine (DMT)

DMT is a hallucinogenic chemical found in various plants and animals. It’s found in the Pineal Gland and various parts of the body. The purpose is to aid the dream states within the sleep cycle. They have dubbed DMT “The Spirit Molecule” as many people believe it is a gateway to the spirit world.

The chemical is released from the Pineal gland while we sleep and creates our dream world. It is also believed to have the same effect during the process of death.

This could be the reason many people see the white light at the end of a tunnel, dead relatives and divine beings during near-death experiences.

The scientific community shies away from explaining the real purpose of why we have the chemical DMT and why it’s produced by the Pineal gland. They either don’t really know the purpose and are ashamed to admit it, or they are hiding the real purpose from us for a reason.

DMT is profoundly in existence within nature and it’s there for a reason. For centuries Shamans have brewed a foul tasting tea called ‘Ayahuasca’ made from the Banisteriopsis Caapi vine.

Amazonian tribes used the brew as a spiritual medicine which launches the user into another dimension. Ayahuasca can also take them onto a spiritual journey.

Those who have taken Ayahuasca have reported seeing dimensional beings, divine energies and experiencing life-changing awareness. The chemical is illegal to take in most parts of the world but many people have visited the areas where they grow the vine just to experiment with the tea. Shamans and spiritual healers brew the psycho-active ‘medicine’ (as the shamans like to label it).

The DMT experience can affect people in several ways. People have reported some strange and bizarre experiences including visions of humanoid dimensional beings, vibrant colors and unusual sounds. Some say the experience can uplift or even scare and frighten, and it all depends on your frame of mind.

It has honored us to track down Glenn Harrold who is a very high profile and well-known author and hypnotherapist from the UK who lives in Spain. Glenn has helped thousands of clients with a wide range of stress-related problems with his highly effective audio recordings and self-help books published by the likes of Orion in the UK and McGraw Hill in the USA.

His experience is fascinating and seemed to have a positive result. Glenn’s son also tried Ayahuasca and had a scary but life-changing experience while drinking the brew.

Here is Glenn’s story from his forthcoming book ‘Renew Yourself’

In 2007 Ayahuasca gave me a deep insight into the workings of my ego. It is an ancient South American ceremony that takes you on a journey into your inner spiritual realms.

Ayahuasca is the combination of a vine and plant mixed to create a brew that’s consumed in a ceremonial setting. It is indigenous to South America and these ceremonies have been taking place since time began.

Taking Ayahuasca in a sacred setting propels you on an amazing journey where you experience and visit higher spiritual dimensions. It is also likely that you will journey into your past and even your past lives.

However, this is always a positive thing as you are literally purging the darkness inside you that is often the driving force for subtle addictions. It can help you heal blocks and wounds inside yourself that have been there for lifetimes.

The Shamans of South America say Ayahuasca is the ‘intelligent medicine’ as it can highlight within you the specific things you need to clear to help you evolve spiritually. It is amazing that a plant can offer us such a gift, but then nature has always been a great teacher. What a tragedy that modern man so often abuses nature for financial gain rather than working in harmony with it as we once did.

I first heard about Ayahuasca from reading the musician Sting’s autobiography, as he’d partaken in a ceremony and relayed his amazing experience in his book. I researched Ayahuasca and learned more about its healing abilities after they committed me to experience a ceremony.

The Shamans say ‘the medicine calls you’ when you are ready and it was calling me. After doing my research I embarked upon several ceremonies with a Shaman who I felt held his sacred ceremonies in the right way.

Each ceremony I experienced was different, but they were always enlightening and cathartic. Ayahuasca helped me see deep inside myself and clear blocks I didn’t know existed. I saw issues inside myself hidden from my conscious awareness but once I had an awareness of these issues, I could process and clear them.

DMT also presented me with warnings of potential pitfalls that lead me to make better decisions in my life. It was scary especially when I faced my shadow, but I also had some amazing revelations and journeyed to some beautiful dimensions. The experience made sense afterward.

He is a tough lad who’d done well for himself but was living a life of bravado; flash with money, fast girls and fast cars. He lived through his ego and although this was all new to him he had the insight and awareness to know there was more to life than being a player. Something drew my son to Ayahuasca for the right reasons.

I wasn’t at the ceremony he went to but apparently after drinking the medicine he had a profound experience. For the first time in his life, he stepped out of his ego and they told me that for two hours he stood in the room’s corner repeating the words “who the f**k am I” over and over.

The shaman running the ceremony tried to help settle him so he didn’t disturb the others in the room but at that point, it lost him. He really didn’t know who he was as he was beyond his ego and everything he identified with.

He eventually settled down and journeyed on in the ceremony and cleared many things. His experience was traumatic but ultimately it helped him as his anger issues had abated after that time. I heard he went back for a second ceremony.

My experiences with the ayahuasca made me realize that many people don’t know themselves beyond their ego. I didn’t. We identify strongly with our name, our achievements and failures, and our personal history, but we are so much more than this.

We are eternal souls on a journey of many lifetimes and this life is a small part of our whole evolution. Everything you know about yourself on a surface level changes with each lifetime. It is only your spirit that remains the same through each incarnation. 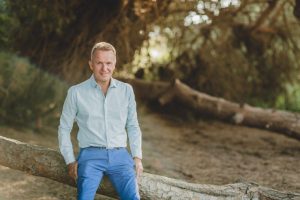 You can read more about Glenn Harrold on his website here

Check out Glenn’s ‘Relax & Sleep Well’ apps on the links below.

Those who meditate can also have a mild but life-changing experience. DMT and the power of the Third eye can be enhanced through meditation.

We have only just scratched the surface with the study of the Pineal gland. It’s a fascinating subject that needs more research. 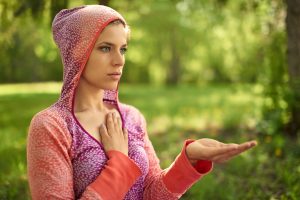 We want to hear your experiences with any of the above so please comment below.