We recently featured a video of a drug driver on WotDaHellDat which went viral on Facebook. 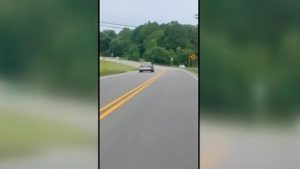 Due to licensing issues we have had to take the video down but many people are asking where they can see the video and what happened to the drug driver?

Apparently, the driver was under the influence of multiple illegal drugs and he was driving all over the road for many minutes, and ended up crashing the car on the side of the road. The driver is recovering in hospital and will be charged with dangerous driving, and putting other lives at risk.

Watching the video has caused fascination online because the driver was so impaired that it’s a miracle that he didn’t kill anyone. Joshua Nance from Marshvile was so high on drugs that there is no way he could control that vehicle. Many people on the highway called 911 regarding his erratic and uncontrollable driving.


As you can see by the video, the whole incident ends in an epic crash which was probably best for the driver and other road users to be honest. Trooper Mitch Geracz stated that the car launched 18 foot into the air once it hit the verge. It’s unbelievable how he survived, and that he didn’t kill anyone else on the road at the time. The driver of the vehicle then crawled out of the car and was completely off his rocker. He didn’t even know where he was when the Trooper approached the vehicle. He just laid there by the car and was not on this planet. 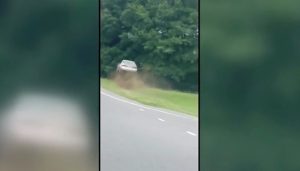 Who in their right mind would take a vehicle out on the roads when under the influence of so many drugs? We think he should be banned from driving another vehicle for life. If he can do this once then he will do it again while under the influence.

Here is another chance to see the drug driver video on our website. You can watch it below if you didn’t get a chance to view it. It would be great to see your comments on the Facebook page as there were so many left from the initial posting, and we love reading your comments.