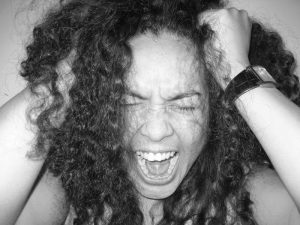 There is nothing more frustrating than trying to solve a puzzle. Which glass gets full first? memes are no exception and everybody needs to know the answer.

Since we posted this meme on the Facebook page there have been thousands of comments with many feeling, they have the answer.

The trouble is that the mind works in mysterious ways and our complex mind hates being beaten.

There is fascinating psychology to puzzles and although those puzzle memes are one of life’s smaller problems, we are making this puzzle one of life’s larger and more important issues trying to solve it.

This could be a lesson for us and a wake-up call to not stress over the “small issues” which the mind does often.

So what is the answer to which beer will be filled first? (we hear you scream).

Well, we may just let you in on the answer once we get further down the page and we won’t keep you guessing for long.

So which glass gets full first?

Can you see how this is filling up number three now? That number three glass is the first one to fill up, so that is the answer: or is it?

We will only know for sure if we had all 7 glasses set up the same as this puzzle with pipes running from each one but that would take ages to make and is it worth the bother?.

Your best option is to solve the puzzle in the mind and that’s what we have done and came up with the answer as number 3. 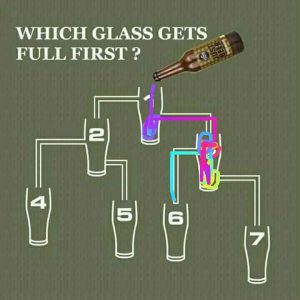 If anyone can prove this to be correct or incorrect by going through the trouble of setting up some kind of example in a video and send to us, then there will be a prize for the winner.

You will need to have 7 glasses or something similar that can hold liquid and have the pipes the same as in this meme for us to see it is working. If you can’t solve it and there is no way of proving it then it’s pointless being a snowflake over it.

We have done some extensive research online and there appear to be some good examples of the answer. Some people have painstakingly gone through the hard work of building a model of the 7 cups with tubes.

The cups correspond to the 7 glasses on the meme image and they even have the tubes so the liquid can flow to each cup. While pouring in the liquid you can clearly see that glass number 3 is rapidly filling up. After a few more seconds the result is in – glass number 3 is the one that fills first.

Leave comments below with any further answers and any proof to your conclusion on this mind-bending puzzle. Let’s not let “Which glass gets full first” meme get the better of us.