The public witnessed a huge and dramatic military exercise on the 4th Feb 2019 in Los Angeles. Video footage shows military personnel on the streets and helicopters buzzing around at low altitude.

Many witnesses have come forward and said it seemed like the world was ending. They issued no warning that this was taking place on the streets of Downtown Los Angeles.

There have been a few of these “drills” in the past which always gets people asking why they are doing these exercises.

So many questions but we will never really know what’s occurring. One eye witness claims the personnel was wearing Bio Chemical suits and they do often do training exercises like this but not usually urban areas.

It looks like “urban warfare” training which involves building in proximity with each other. The question is; why can’t they inform the public through the local media so that people know of the drills?

People would not be so alarmed if word got around that an “urban warfare” military drill will take place on a certain date in a big city.

So, even though the video looks dramatic and alarming, there explains this dramatic scenario… it’s called “urban ops”. It’s training that is highly important and they normally close off streets so they can operate safely. 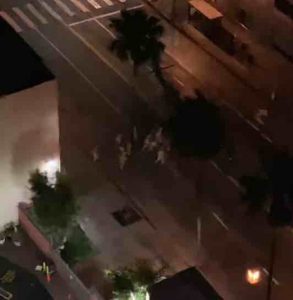 Those witnesses scared and alarmed with this drill may have missed a notification from the local police of media? The video looks like it’s being shot from an apartment window high over the streets. You can also see the street is free from the public so the military can do the exercise.

The more interesting aspect of this drill is why are they now stepping them up? This recent dramatic military exercise in an urban situation has definitely got people talking.

Did you see this drill or have you seen any similar ones recently?