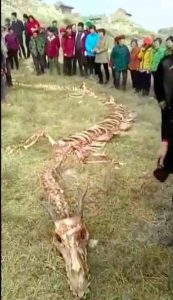 Dragon skeleton has been found in China and villagers can’t believe it is 65-foot long.

Imagine going for a lovely walk in the countryside and coming across the bones of a huge 65-foot long Dragon. Villagers from Zhangjiakou City, in China’s northern Hebei Province, came across this monster while out and about.

Some villagers are quite superstitious over this rare find and they are convinced it is the bones of a real dragon. There are others that are also convinced that it is some kind of prank or PR stunt.

A couple of the villagers have mentioned that the skeleton has what looks like a cows head. No statement has been released from local authorities regarding the skeleton so it is more than likely a fake.

The video below shows the scale of the skeleton and also the villagers that are crowding around the dragon. If they were convinced that it was real then they wouldn’t be perched on top of its head while having a photo taken.

We have studied the video and images and there is no ‘fire-breathing’ compartment in the rib cage. We also think that the villagers could have eaten all the meat from the dragon to leave its bones intact. The fire-breathing organ was probably removed to help cook the meat which would have fed the whole village for a week. 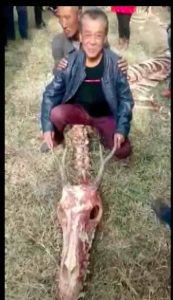 Another theory was that the dragon was flying through the area and was shot down by a kids catapult. The dragon then crashed into one of the villages giant speckled Toadstools that have been growing along the roadside of Zhangjiakou City. This theory was stated to us by local drug dealer ‘Chang Dong’ who sorts out the locals with some LSD from time to time.

Is it real or fake? It’s a lot of effort to put in just to play a joke on the locals. See video below: