UFO orb lights were witnessed a few days ago over the sea in Mexico. The lights were recorded on Facebook Live by various witnesses.

The recent video is very similar to the famous “Phoenix Lights” sighting that was witnessed by thousands of people in Arizona back in 1997.

The Phoenix Lights is a very famous and well-documented story that happened on 13th March 1997 and the lights were witnessed by so many people that the media had to investigate and report on the story.

The lights were creating a triangular formation which passed over the state and there was also a stationary formation of lights that were witnessed.

The triangular formation of lights glided across the sky and had no sound according to the many people who had seen the lights. The sighting was recorded by many high profile people who also witnessed the sighting of these unusual UFO orb lights. The governor of Arizona was one of those many witnesses.

The video featured here was recorded live by a Sarah R Adams on Facebook a few nights ago. The lights started as a few illuminated orbs and then became as many as Nine. Apparently, the lights have been seen before in the area on a few occasions but this time they had been recorded live on Facebook.

The people who recorded this on Facebook had also seen these lights before and on the hills while camping. This time they were illuminated in a formation over the sea.

After about 10 minutes of recording, the lights started to go out one by one and then shut off completely. We love the paranormal and a UFOs and we are true believers but could this be lights on a boat? Could it be a fisherman on a fishing boat with small lights playing games? 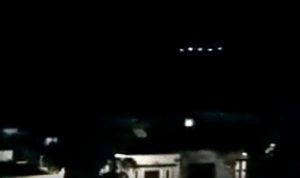 You have to look at the rational side before really pinpointing on the alien topic but we really do want this to be aliens. They do seem to be very strange and are similar to the Phoenix Lights that we mentioned earlier in the article and can be researched here.

Are we really being visited by alien civilizations from space? There are millions of sightings all over the world and countless documents online which you can download from high authority government websites.

What do you think it is? If you get a chance to capture any strange lights in the sky then please do send over any images or video footage to us at Wot Da Hell Dat. You can message us on Facebook and we will respond to you as soon as we can.