It has now got to the stage where a sheriff deputy is not even allowed to flip an inmates food tray.


The world has gone mad and our authorities are causing this mayhem. The snowflake mentality has made its way into higher places as if they are enjoying making these pathetic and idiotic new rules.

A sheriff deputy suspended for 30 days for flipping an inmates food tray from his hands was from Denver and had a slight disagreement with the inmate. It was over a trivial matter because the breakfast line was apparently closed. So this isn’t the way to treat a prisoner then?

Darell Jordan was suspended without pay for 30 days because he apparently harrassed an inmate which was really a disagreement which ended up with the deputy flipping his tray. It’s laughable really when you think about why he has been suspended. The deputy was suspended once before back in 2014 so it’s not the first time. 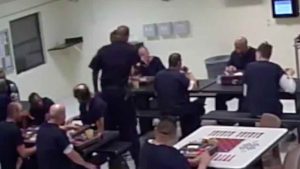 What does this mean now? Are inmates allowed to run riot across a prison because they can meltdown knowing the authorities will look out for them?

This is the reason why many schools and universities are breeding a highly sensitive society where they will meltdown at the slightest thing just because they are not getting their own way. This is all down to the stupid rules that have been set in stone where you can’t use force, offend, say the wrong thing or shout too loud around those sensitive types.

It was bad enough hearing about these incidents of melting down in schools, universities, and college campuses but now we have to face the fact that prisons are also on the list.

The video of the incident is below which was caught on the jail security camera. As you can see it’s not even classed as a physically abusive incident but this inmate obviously knew what he could get away with and decided to abuse them.

What an absolute joke society is becoming. If it gets any worse then we may as well all take advantage of these new laws that have resulted in a generation of “Melts”.

You can’t blame them for acting out just to get their own way and as for this poor sheriff deputy who has been suspended without pay for 30 days. He may as well give them the middle finger and leave the job.

What would you do in this situation?