Imagine getting backstage to interview Henry Rollins from Black Flag that you have idolised for some time and actually get the chance to talk to him and a few of the members?


The rare video is from 1984 and has recently emerged online for all to see. If you are a fan of Henry Rollins from Black Flag and Sons of Anarchy then you must see this.

This young fan managed to blag his way backstage to interview the band and caught sight of Henry Rollins from Black Flag who was also the frontman of the band. The kid must of been no older than about 16 years old and he would of been extatic with the chance of a lifetime.

The very nervous young boy was firing a few questions at the band and before he could get confident and haughty, Rollins stepped in to start intimidating the boy. The first question was hesitantly and nervously delivered to the 3 members of the band waiting casually for the boy to interview.

“So what’s your new sound, are you going more slow, heavy metal kind of, maybe?”

Before Rollins steps in the taller member of the band politely answers his question with “Kind of..”

His second question was “So how’s your tour going so far?”

Rollins answered in his initial polite way “Fine thank you, how are you”

Rollins then takes the opportunity to start getting a bit more intimidating to the young interviewer and describes the kids look as “a bit all over the place” to the shock of the young boy.

You can clearly see the interviewer dissapearing back into his nervous demeanour after the drugged up Rollins initiation. The kid kind of gets to answer rather arrogantly and tries to mimic and match the wrath of Rollins and his attitude.

Rollins ends up talking about how he really doesn’t like interviews after talking about the albums and other bands that the kid would probably be into. Henry Rollins likes to take control of the interview and starts to deliver the questions to the interviewer.

The kid continues with another question like “so do you think your’e selling out?”

The kid was quite possibly very glad that the interview had stopped right there and it’s surprising that he had kept this interview on film all these years. It’s entertaining viewing and typical behaviour of Henry Rollins who describes himself as polite but nasty.

Henry Rollins, was also in a band called Sons of Anarchy and had many more fans when he was invloved in the band.

We think the kid (although nervous), kept his cool and defintely shows what the kids were like back in the 80’s compared to what they are like today. Can you imagine the backlash Rollins would of got if he had intimidated the interviewer today? 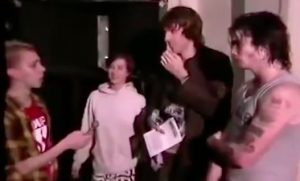 This kid would’ve been melting down all over the place with the first step of intimidation in this interview. It wouldn’t of lasted no more than about 2 minutes as the interviewer would of ran off screaming and crying saying that he was being offended.


Here is Henry Rollins 30 years later on the Comedy Channel: