Pranksters cheat death by climbing into the back of a van during the early hours of the morning on the 18th April 2018. All they wanted was a cigarette.

The internet has created many social celebrities that have risen to fame by recording their own videos, creating pages and becoming social influencers. With every trend, you will get those that will go to the extremes for likes and comments.

On the morning of 18th April, four YouTube pranksters decided to get involved in another video. Ally Law was streaming video on Facebook Live while driving back from Liverpool in the UK with Lee Marshall (aka Discoboy).

You can clearly see 2 guys in the van in front who were climbing in and out of a van with its shutters open in the pouring rain. The Van was doing about 90 miles an hour and going in a different direction to where the lads were heading on the motorway. YouTubers Dylan and Rikki were cheating death by jumping onto the white van and being recorded by Ally in Lee’s van behind.

To Ally’s disbelief, he then started filming on Facebook live while Rikke and Dylan climbed into the back of the van at 90 miles per hour along the motorway.

You can clearly hear Lee and Ally getting rather anxious about what is happening in the van in front. It’s a dangerous situation and Lee is getting very worried but at the same time laughing his head off.

The guys are trying to work out a way of informing the driver of the van in front that there are two guys randomly climbing in and out of their van. You can hear Lee working out a story to tell them.

A good idea suggested by Lee was to tell them that the guys are drunk and don’t really know what they are doing and just so happened to have ended up in the back of a speeding van on the motorway. 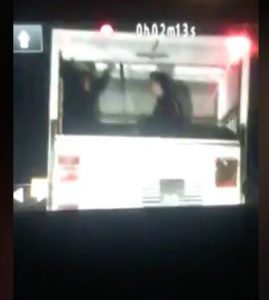 You couldn’t write a better comedy script than that.

As the live broadcast continues there are vans and vehicles hooting the female van driver and the guys suddenly realize that the driver in front is finally pulling over into a service station car park. Lee and Ally finally find a chance to drive up to the side of the van and shout “your shutters open”.

While Lee and Ally are bantering with the driver Dylan and Rikke have climbed out of the back of the van all safe and sound.

The end of the video includes a recap of what happened from Rikke Brewer who states that they actually climbed in the back of the van from Lees vehicle. 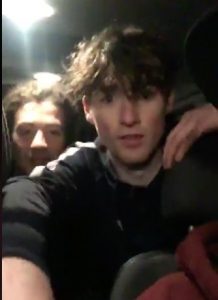 There is also a piece of good safety advice from Ally and Lee who state that it’s not a good idea to copy these ludicrous acts of madness and that Rikke and Dylan are experienced at doing them. These pranksters cheat death on regular occasions so they know what they are doing.

You can check out the guy’s pages below: