Is the Marvel Venom movie the darkest one yet? We can’t wait for the release of this one as it looks amazing. Tom Hardy is the main man behind the character and we find out some juicy details.

There have been a fair few Marvel movies recently and every so often you get one that stands out. Black Panther was a box office smash and Deadpool was a movie to talk about too but this latest Marvel Venom movie looks set to ring all the bells and whistles for movie fans worldwide.

This new release coming in October this year is set to be another success and stars Tom Hardy as Eddie Brock who is the main Venom character.

Ruben Fleischer who directed Zombieland has been involved in the creation of this masterpiece which we hope will be in 3D. There should be a combination of comedy and horror included in this movie and if its anything like Rubens Zombieland, then it should have its lighter comical side.

Tom Hardy seems quite comfortable morphing into a Symbiote alien species and the CGI in this film is set to astound the viewer. The symbiote is creepier and more ferocious than the spiderman character which gives the film that darker edge.

Sony has delivered an edge on this Marvel edition and looks set to offer the horror fans something to sink their teeth into. Talking of teeth – the symbiote has some of the scariest teeth since the Alien movies.

While filming Venom, Tom Hardy has been keeping fans up to date on Twitter and Instagram and posting teasers and pictures of him on set. There is not a great deal of information coming out other then what’s being shown in the movie trailer as Marvel like to keep things quiet.

There is a rumor that Woody Harrelson will be making an appearance in the movie too so we could be expecting a few big players making the odd appearance.

Venom looks set to be another success for Marvel and Sony Pictures and we may see a few more Marvel movies being produced with multiple genres to please everyone. This fusion of superhero, horror and Science Fiction could be the icing on the cake for the Marvel brand.

The Marvel Venom movie is set for a release in October 2018. 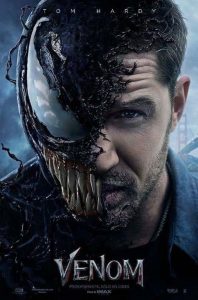