Residents of a town in Alabama are worried that a train carrying Biowaste (in other words – S**T) will cause a massive stink if the weather gets very hot.


There is nothing worse than the smell of crap on a hot day when the sun is beating down. What makes it even worse is that it is human crap and even worse, it’s not even from Alabama!

The Alabama town of Parrish has been complaining that the subtle smell of s**t will become overpowering if the sun cooks it. The 982 residents are on the verge of going insane due to the stranded train carriages carrying this load of crap will engulf the area with the smell of human waste.

The train has already been there for 2 months and there have not been any initial developments to move the s**t train.

Why trainloads of other people’s poo have been rotting in an Alabama town for months https://t.co/1srOHx8rU4 pic.twitter.com/9kSG9TzHxP

SWEET HOME ALABAMA. 10 million tons of human poop from New York (“bio-waste”) sit in a Parrish AL rail yard awaiting transfer. Residents worry because it already perfumes the air and “What if it gets hot?!” pic.twitter.com/mdSMx6mOw5


The town Mayor has been chasing this up for weeks and it looks like the waste is being dumped there for the time being without any indication of the biowaste being moved out of the area.

She said: “It’s proper s**t and I have had a look into one of the carriages to inspect the content and realized that there is a mammoth amount of it filled to the brim. I put on my hazmat suit, woolly gloves, and s**t proof hunter boots and managed to find out where it came from”

We asked her how she knew where it was from? and she replied “It’s all coming from New York and I know this because there is digested Pizza, bagels, and cheesecake all over the carriage. I wouldn’t mind so much if it was from Alabama because the smell of it would blend in with the area”

Apparently, the smell is covering a 2 square mile radius and covers the local baseball and softball field. She is worried that the people playing there will get ill. The constant smell can affect the local’s wellbeing and quality of life due to the biowaste.

After all this, they have told the mayor that situation is almost over and they will only have to smell s**t for another few weeks and that they could wear gas masks or put a peg over their noses for the next couple of weeks until they manage to get the situation sorted. 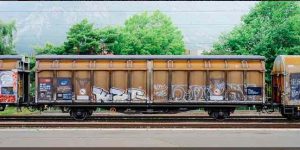 You can read more of the story here